Agriculture on this planet is about 50 million years old, if you count ants and their underground fungus gardens. But human agriculture seems to begin about 10.5 thousand years ago, in the Fertile Crescent in the Near East, with the domestication, in a short space of time, of barley, two varieties of wheat, sheep, goats, pigs, and cattle. (As we have seen, the domestication of dogs came earlier, maybe a lot earlier.)

Agriculture is one of the greatest changes ever in the human condition, but whether it was a net improvement for the average person is questionable. There’s a lot of evidence that people were worse fed, and sicker, in a lot of places once they started farming. On the other hand, agriculture supports more people per acre than hunting and gathering, usually by several orders of magnitude, so population pressure is probably a big motive for experimenting with planting seeds. 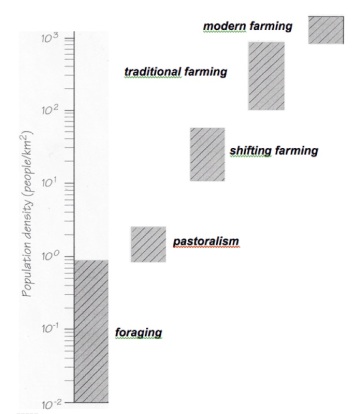 But we are still left with an unsolved question. Why, after tens of thousands of years in which human beings showed little inclination to adopt farming, does it develop independently within a five thousand year span in half a dozen spots around the globe? I’ve run into anthropologists who think that it just took that long for populations to reach carrying capacity, but this shows no appreciation at all for the time scale of exponential population expansion. Any human population with room to grow can increase its numbers tens or hundreds of time on a time scale of less than a thousand years. So something other than population-below-carrying-capacity must have kept people from taking up farming for a long, long time. Two possibilities

1) The Ice Age climate wasn’t suited for farming. This explanation was proposed by Robert Boyd, Peter Richerson, and Robert Bettinger. We’ve already seen that Boyd and Richerson argued that the extreme climate swings of past glacial periods favored adaptation via cultural learning (rather than via individual learning or natural selection). These same swings ­– like the dramatic return to glacial condition in the Younger Dryas Cold Event – might have been too much to allow for prolonged settled life in one place, and attendant experiments with agriculture.

Another version of the argument: here’s a recent article, The ant and the grasshopper, presenting evidence that seasonality was the key factor in the the invention and adoption of agriculture. In seasonal environments, there was an incentive to store food to even out annual variations. This encouraged people to settle down, and then to start sowing plants and herding animals. The seasonality factor may explain not only when agriculture happened, but also where.

2) People weren’t genetically adapted to settled life. For example, living a settled life generally means more exposure to disease. It could have taken a long time for humans to evolve resistance to diseases of sedentism. Another possibility: natural selection might have affected behavior over this time. There’s an argument to be made that human beings are a self-domesticated species – that we have selected ourselves, as we have selected other animals, to be tamer, and less aggressive. You can see primatologist Richard Wrangham and anthropologist Robert Franciscus at a conference the year before last making this argument, and talking about morphological indicators of domestication. They mainly talk about the transition to Homo sapiens, but some of the same morphological changes occur in the transition from early to later Homo sapiens over the past several tens of thousands of years. It may only be in the last ten thousand years or so that many human populations grew tame enough to live in settled communities and take up agriculture. In both ants and humans, behavioral evolution toward increasing cooperation within the species may have been a precursor to the domestication of other species.

1 thought on “Domesticated, I tell you”